14.83-Carat ‘Spirit of the Rose’ Diamond Could Yield $38MM at Sotheby’s Geneva

“The Spirit of the Rose” — a 14.83-carat fancy vivid purple-pink diamond that’s so special it has its own website — is expected to fetch up to $38 million when it hits the auction block at Sotheby’s Geneva on November 11. 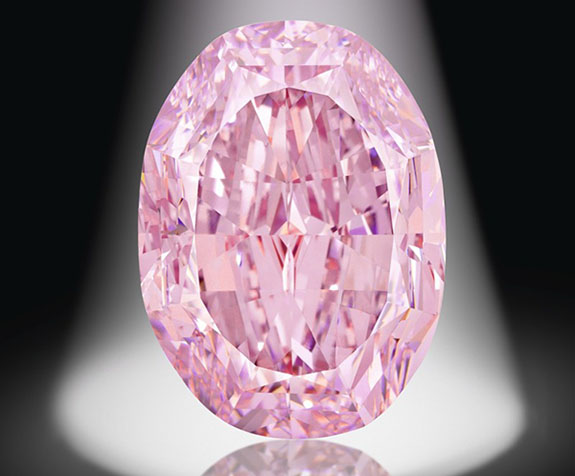 Sourced in 2017 at Alrosa’s Ebelyakh deposit in Yakutia, Russia, the oval-shaped sparkler was cut from a rough stone that weighed 27.85 carats and remains the largest pink diamond ever mined in Russia. The smooth-surfaced alluvial stone measured 22.47 mm x 15.69 mm x 10.9 mm.

The rough diamond was named “Nijinsky” after the famed Russian ballet dancer, Vaslav Nijinsky. In keeping with the dance theme, Alrosa chose the name “The Spirit of the Rose” for the finished stone to honor the famous 1911 ballet of the same name. In French, it was called “Le Spectre de la Rose,” and its primary dancers were Tamara Karsavina and Nijinsky.

The Gemological Institute of America graded The Spirit of the Rose as internally flawless with excellent polish and very good symmetry. It’s the largest vivid purple-pink diamond ever graded by the GIA. Sotheby’s has set the pre-sale estimate at $23 million to $38 million.

“A large fancy vivid purple-pink, internally flawless, with perfect visual characteristics such as this one, enters the market, literally, once in a generation,” Eden Rachminov, chairman of the Fancy Color Research Foundation, told diamondworld.net in August 2019 after examining the gem. “The stone has the most desirable pink undertone dispersed perfectly, and looks much bigger in relation to its actual weight.”

“In the world of colored diamonds, pink diamonds are some of the most treasured, especially at larger sizes,” John King, GIA chief quality officer, said in a video that appears on a special website created for The Spirit of the Rose. “It’s unusual to see pink diamonds in the market over one carat today. Weighing more than 14 carats is exceptional. The color is an amazing specimen. Being also internally flawless makes it truly a unique stone.”

The Spirit of the Rose is currently on exhibit in Hong Kong, after which it will head to Singapore and Taipei before returning to Geneva ahead of the November 11 main event.

Already the world’s biggest diamond producer in terms of sheer output, Russian mining company Alrosa is looking to become a major player in the category of gem-quality colored diamonds. Alrosa’s push is coming at a time when Rio Tinto’s Argyle Mine in Western Australia — the world’s primary source for pink, red and blue diamonds — is scheduled to close.